MAKAR SANKRANTI  during my growing years was an occasion and an event to remember. Irrespective of  how cold the weather was, it was a must to have a morning bath for all members of the family , the only exception being made for someone not feeling well , who was spared the torture. Small heaps of rice & maash, with one or two tiloy, and a coin, the whole thing called नशरावा- as many in number as the members of family were placed on a piece of paper and small Pooja was done. The heaps were bundled together and were given to the  Panda, who  happened  to come the same day or any day afterwards.
The joie de vivre was the Khichdi of rice mixed with m 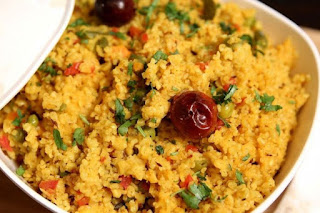 aash, served with liberal helping of Ghee poured above. This was an auspicious occasion as the entire month of Maagh is considered holy and sacred. The occasion is also known as Khichadi ki Saaji or Saaja.
Khichadi is prepared and served even now, rice and maash are also given away  as in old times but one does miss the ambience that characterized the occasion.
Posted by aarkay at 3:40 AM