A hard earned electoral victory for Congress, nothing short of a miracle in the face of all out fierce campaign and propganda carried out by the  ruling party , that  lays claim to  being the largest political Party worldwide, and admittedly also the financially the strongest party, thanks to the Corporate funding upto the neck should be construed as a lifeline  keeping the dire straits the Congress is in throughout. Notwithstanding the miniscule difference in votes secured by the Congress and the BJP, which is being touted as a mitigating circumstance to draw some consolation, the Congress have a rare opportunity to serve people keeping alive the ethos, they are known for.

There are voices being heard about non - sharing of top slot by Old Himachal to  the neglect of Kangra district in giving the top post inspite of giving maximum seats. Though not wholly unjustified, the Party's supporters should  cooperate and allow the Government to run smoothly and efficiently.

Hopefully, the new Government will make all efforts to meet the aspirations of all Himachal people, shedding the misconception of Old  & New or Upper, Lower or Middle Himachal.

On a personal note, I am happy that the Candidate I voted for has been able to make it by no mean margin.

Posted by aarkay at 9:49 PM No comments:

The cat is out of the bag and anxious moments are over. Though I hold no brief for any Party,the Congress having come out victorious to form the Government have reason enough to be happy though not any reason to feel elated.  This has been an inequal fight, the BJP being more resourceful be it money power,an army of dedicated workers, backing of Corporate owned Media etc. etc. The Congress has had not one adversary but many.

I am amused with the idea of star campaigners comprising the Prime Minister,the Union Home Minister, other Cabinet Ministers and CMs of BJP ruled states descending upon the tiny Hill state  with  the all too familiar narrative of purported achievements,with the backing of a supportive media, more often than not sounding ludirous especially in the context of a State assembly election. Quite naturally, this did not go down entirely well with the educated and well informed electorate of the State.

The narrative of double engine so brazenly touted by the ruling dispensation  was in fact a mockery of the federal system prevailing in the Country and was rightly rejected by the people. Moreover the aspirations and expectations differ  from state to state. The mention of a Bhavya Mandir or Jai Shriram ki dahaad may appeal more to UP than Himachal which otherwise has a host of magnificent Temples as also a very large number of Temples of local deities. A clear vision or perspective for Himachal was found missing in speeches and rallies.

As for the winners and losers, while most of the results are on expected lines, the shock has come with the defeat of Kaul SinghThakur, Asha Kumari, Rakesh Singha & Gangu Ram Musafir. Among winners,Mr. Jagat Singh Negi from Kinnaur makes a hat trick !!

It maybe naive to think that OPS was the only core issue. Besides,issue of rising prices and growing unemployment was not addressed.Apple growers have had their own grievances.

The new  government have an onerous task of fulfilling promises.

Hope they do not fail the electorate !!

Posted by aarkay at 3:12 AM No comments:

Posted by aarkay at 3:11 AM No comments:

A visit to the  Shirdi temple yesterday is the fulfilment of a cherished dream especially for my better half. The 400km or thereabout  two way journey was a bit tiresome but worth it. The mobiles and other elecronic gadgets are not allowed inside understandably so, but to our surprise the prasad and other offerings in kind are also not allowed though the shops do a good business of selling various things. We had left our shoes and mobiles in the car. Parking however was not an issue. We were lucky to be told that there was comparatively less crowd of devotees.The zigzag passage with steel railings on both sides was full of devotees and visitors but there was no need felt to sit and rest on the steel benches fixed all along on one side due to less gathering .

One more interesting thing,  along the way  on the roadside the shops display attractive  big sign boards of  'चाह ' but we the North Indian tea enthusiasts  are in for a surprise when tea  / coffee is offered in ultra small disposable cups, roughly one fourth the size of cups we are used to. But both tea & coffee are very tasty.

Posted by aarkay at 6:59 PM No comments: 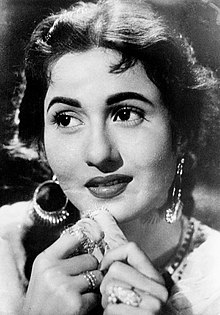 The very beautiful and talented Bollywood actress Madhubala, who was the heart throb of millions in her life time left this world this day fifty three years ago aged 36 only.

Much has been said and written about her films, acting, initial struggles, unhappy life and her illness. Lately I came across one of the lesser known facts of her life that increased my admiration for her all the more.

It is said that though a practising Muslim, she had great respect and reverence for Guru Nanak Dev ji and Sikhism  in general. She always carried in her bag or purse a copy of the book of hymns called Gutka in Persian script.

She made sure that every year she was present at the Gurudwara  at Andheri in Mumbai on the occasion of Gurpurab. She would sit engrossed in Prayers for hours at the said Gurudwara and perhaps contributed in cash or kind out of devotion.

She would ask her Producers and Directors to fix her shooting schedule accordingly so as not to miss the occasion.After her death, her father Ataullah Khan continued to be a part of the occasion.

It is said that every year on the occasion of Gurpurab, Ardas is done for her in the Andheri Gurudwara, Mumbai.

Such was her devotion.

Posted by aarkay at 3:02 AM No comments:

With the passing away of Bharat Ratan Lata Mangeshkar, the legendary Playback singer today , an era of Hindi film music in female voice has come to an end. Hers has been a saga of struggles and success, with periods of highs and lows thrown in.Besides singing outstanding solos in all genres, she came up with wonderful duets sung with all the well known popular male singers of the times , with speaks volumes for the versatile singing and  quality of her voice. The void left by her death is difficult to fill. Yet, there is consolation enough in the fact that she lived till ripe old age of 92, other example being of Manna Dey. Unfortunately great male singers like Muhammad Rafi, Mukesh and Kishore Kumar couldn't reach even sixty.

Humble tributes to the legend who's voice will for ever remain with us !!

Posted by aarkay at 8:49 AM No comments: