Shopping Mall  culture  is fast invading our lives , even in small cities and towns. The new locality  where we have shifted  some seven months back has mercifully no Mall . It may be more convenient  to  finds goods of daily need and use under one roof  and may also save  us  our  ‘valuable’  time  which each one of us  seems to have run out of   these days  due to hectic schedule and racy lifestyle,  but still I for one miss that personal  bond that existed between the  dealer/merchant/shopkeeper and the customer  in good old days.
I remember my childhood , when as kids,  for years we  went  to a particular barber for a haircut- and why not , as it was he who   would come to our home to give us a haircut when we were too young  to sit on a   high chair  in the shop  in front of a large  mirror  and  unable  to absorb the unfamiliar atmosphere of a  shop or a saloon.  He won’t   mind walking two kilometer  one way  on foot  when a haircut  fetched him  only   20-25 paise .  I still remember his name- Jhania Ram.
Similarly , Kammi  (Karam Chand ) was our family  tailor , till the time   we  grew up and  became fashion  and style conscious  to look for   ‘better’  choice or alternative .
Like wise, one Bhagwati Prasad  was our dhobi for many years  and my  father would endearingly  call him baretha , the meaning  of the word unknown to us  even today.    The grocer    and the sabziwala  would  gladly offer my father a seat inside the  small  shop  where  gup-shup  would go on for quite some time . I never saw  my father  haggling over price with any one.
Walking around in a shopping mall with a trolly  may satisfy our ego for a while, but  the pleasure of shopping  for    various goods  from   different  shops  was  immense. The personal bond  is  certainly missing in these shopping malls, however courteous the  attendants   may appear to be !
Posted by aarkay at 1:07 AM 2 comments:

More than a month into retirement  and I know not what to do now, with my physique  and mental faculties  all in tact. The philosopher in me prompts me to liken this phase to the  last Act of a drama ,which may  end soon or   stretch itself   even to 20-25 years. But last Act it is. It seems  thirty five years  of service have come to  naught  with no achievement to count or laurels to rest upon. Only I have been able to earn  sufficient  pension to  take care of my  financial needs . The words of the shayar  Akbar Allahabadi ring so true :
Kya kahen ahbaab  kya kar-e- numaya kar gaye
BA  padhe , naukar bane, pension mili  aur mar gaye !

Any suggestions please !
Posted by aarkay at 1:05 AM 4 comments:

Born this day in 1932, Meena Kumari, the great  Bollywood actress of yore , due to penury and poverty   was forced to act as a child artiste at  the age of six. This also happened as a quirk of fate , as plain looking Mahazabeen Bano, as she was named then,  was not considered even worthy of  entering the film line, by her father .It was her mother who took her to some producer/ director  As luck would have it , her talent was spotted and her  career took off.She acted in many  well known films , like Miss Mary, Sahib Biwi aur Ghulam , Azaad , Kohinoor, Dil Apna aur Preet Parayi & many others ,  and last but not the least, Pakeezah which proved her swan song  but also immortalized her.All the songs of the film  became hits and were played all over .Perhaps this was the best that Kamal Amrohi , her separated  husband and also  Director of the film could have done for her.  Frustration and loneliness proved too much for her and she took to  drinking .It is no secret that while shooting for  Pakeezah, Meena Kumari ,  due to illness, was not able to speak and one  Sadhana Khote dubbed for her.   This hastened her end as she died in March 1973  at the relatively young age of forty.  If Dilip Kumar is the Tragedy King of  Hindi cinema, the crown for  Tragedy Queen would certainly go to Meena Kumari . 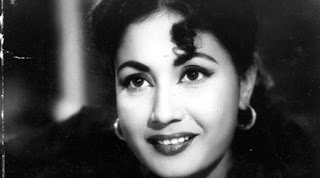 Posted by aarkay at 2:10 AM No comments: