Today is the 121st birth anniversary of Janaki Ammal Edavalath Kakkat, Janaki Akmal for short, the eminent Indian Botanist.She was the first woman to obtain a Ph.D. in Botany in 1931 from Michigan University in the US and also the first woman to be conferred D.Sc.(Honoris Causa) from the same University later. She started her teaching career at the Maharaja Christian College in Madras.She was invited by the Prime Minister Jawahar Lal Nehru to organize the Botanical Survey of India and rose to be its Director General. She had also worked as a geneticist in London . She did pioneering work in Sugarcane Research.
She had worked at Jammu and Allahabad also. Many honours and  awards came her way  including Padma Shri.An award was also instituted in her name.
She died on 7th February, 1984 aged 86.
Our humble tributes to the luminary ! 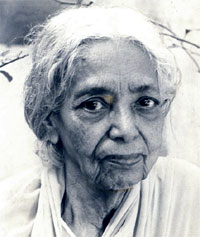