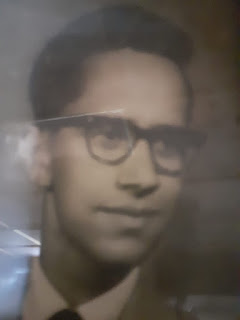 The  memory  flashback  takes me to the year  1986, when  on completion of my two year training in November,  I received my posting orders as Tehsildar  Pooh, District Kinnaur. I was at Ghumarwin at that time.  Much against the  well meaning advice of my seniors to approach some Minister for adjustment  at some other place, I decided  to join.  I spent the joining time at  Shimla with my parents at Shimla. As the  days for my departure for the new place  were drawing near, my  father-in-law  Sh. P.N.Sharma who we lost just three days back , sensing the difficulty that we might face on the way as also on arrival volunteered to accompany us. And difficult it was with even  minimal  household goods loaded on bus top  and a seven month old  baby in the lap. I had not gone beyond Rampur Bushehr before and Pooh was at a further distance of 149 Km from  Rampur

We boarded the Shimla–Kaza  night service bus on 26th of November which started at 8PM. The journey went on smoothly till Tapri, which was also the Regional HQ of HRTC at the time. To our utter dismay, we were told that due to blockade of road  the bus would not proceed further. To add to woes were the house hold effects loaded on bus-top. My father- in-law, unlike me of an open friendly nature struck conversation with the bus conductor who as it turned out was from the Arki area , which also is the native place of my in-laws. The good Samaritan helped us offload the household items and arranged to  keep them in HRTC shed to be transported by us later.I may add that the said conductor after some days met  with a fatal accident with many other passengers on board  at Kingal , leaving us all sad.  With some clothes and other important paraphernalia, later in the day we boarded another bus which  dropped  us at  Powari, where we had a forced  stay of  two nights  amid snow in a Federation guest house. There also a kind GREF employee invited us for breakfast. At last we made it to Pooh on 29th November, where we had to stay put in  PWD rest house for days together  as the accommodation was not vacated by my predecessor after the board examination of his son was over. Father in Law returned to Shimla after two days. This is just one instance.

He also kept visiting my parents when they fell sick by turns  keeping me posted with the developments  through letters as there was no other way of communication available. He was quick enough to accompany me and my wife to   hospital when I had severe jaundice attack in 2007 and also kept visiting as I was recovering.

A gentleman always immaculately dressed in neatly ironed suit and a tie , always sporting shining shoes, he was a regular on the Mall and at the Indian Coffee House accompanied by two-three  friends.

A sociable , friendly and generous soul, he had no dearth of friends. Honest to a pie,  I never saw him haggling over price with any shopkeeper . The carpenter, electrician , plumber whom he engaged  from  time to time for work always went satisfied as he would always pay them over and above the amount initially agreed upon.