A SIMPLETON TRIES TO ACT SMART:

Familiar to the words ‘manicure’ and ‘pedicure’ only to the extent that they do exist in the English dictionary, I am quite regular, rather scrupulous in cutting the nails of my hands once in a week , and of feet every two weeks.For this I need a nail cutter handy as I am not on eofthe types who can cut/pare their nails to perfection with a razor blade . But once I was faced with a situation when my nails became due for cutting and I had no nail cutter .
The incident relates to early ‘80s. I was away from home for a few days and had forgotten to take the nail cutter along with other paraphernalia. On a day , the nails got due for cutting . What to do ! Those were not the days of ATM or debit card and one had to bank on and make do with the cash one had in the pocket. 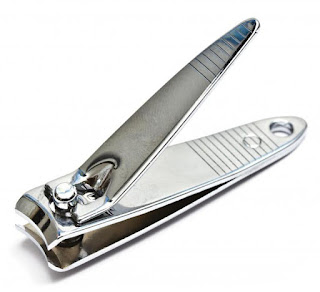 Even though earning at that time , I had not much of cash with me and had to live within the amount I had. Purchasing a nail cutter seemed out of the question as I needed to save till the purchase of bus ticket for the back journey. I went to a small shop the market and asked the boy to show me a nail cutter. I cut my nails on the pretext of testing the nail cutter and asked the price. When told, I asked the boy to reduce the amount of price as at my place the same was available for much less amount . He refused to oblige me saying that the price was fixed. I refused to buy it much to the annoyance of the shopkeeper boy who pointed out that I had served my purpose cleverly . I didn’t say anything as he was right.Coming back , I myself felt bad and a bit guilty about it .However, I put the matter to rest hoping that I would be home before the next nail cutting became due.
Posted by aarkay at 4:55 AM