Yesterday i.e. 29th October ,2018 marked the 400 years of the execution by beheading of Sir WALTER RALEIGH, a soldier, writer, poet, explorer and a colonizer , in short a polymath.
Born in 1552AD( 1554 according to some), he served as a soldier in Ireland and  France and is remembered as a ruthless suppressor of the rebellion in Ireland. Once a favourite of the 'Queen Elizabeth I, he was knighted in 1585 for his valuable services to the Crown.Falling out of favour with the Queen later, due to his courting marriage with one of the Queen's laidies-in -waiting without her permission, he along with his wife was taken prisoner and both were kept in the Tower of London where he wrote History of the World.Both were released after some time .
He was a passionate poet and wrote remarkable poetry not subscribing to the Classical style.
As an explorerer, he explored a territory in North America and named it Virginia in  honour of the Virgin Queen. 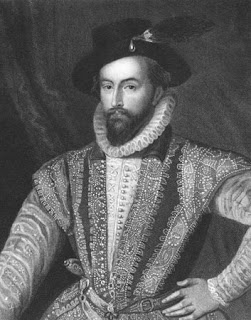 After Queen's death in 1603, the bad phase in Walter Raleigh's life started.
He was charged with the conspiracy of killing James I, and sentenced to death. He was executed by beheading on October 29th, 1618 when he was 65. At his request, before beheading he was shown the axe.His contention was that people might not think that at his age , he was afraid of death.
Many called his execution unjust , cruel , a travesty and a bad patch on the British  Judicial system .
Really tragic that a polymath like him met his end thus !
Posted by aarkay at 5:48 AM