Jaspal Bhatti was  a popular Comedian, Actor and a Satirist.He was born in Amritsar, Punjab on 3rd  of March, 1955. 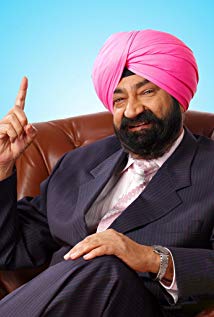 An Electrical Engineering Graduate from the Punjab Engineering College, Chandigarh, for some years he was an employee with the Punjab State Electricity Board.With humour running in his veins, in College days he had started Nonsense Club.Name and fame came to him with the television series Flop Show in early '90s which was produced by his wife Savita Bhatti, who also acted and appeared as his wife.Though only ten episodes were made and telecast, the show had an immense effect on the viewers.His mini comic strip Ulta Pulta also became very popular. The reason for the extraordinary popularity of his ventures was  honest and simple humour, which touched upon the day to day problems faced by the common man, due to the corrupt and inefficient system prevailing in Governance and elsewhere.Even the public indulging in unfair and corrupt practices like theft of electricity came under his scanner. His co-actor, the late Vivek Shauq gained popularity as an actor from Bhatti's serials and became a successful film actor.
Subsequently he acted in films also and was cast in movies like Jaanam Samjha Karo, Aa Ab Laut Chalen, Kartoos,
Khauff,Yeh Hai Jalwa, Koi Mere Dil Se Poochhe, Tujhe Meri Kasam, Nalayak,Kuchh Meetha Ho Jaye,Kuchh Na Kaho, Jija Ji, Fanaa, Chak De Patte, Power Cut, Dil Pardesi Ho Gaya and some others.
His Punjabi Feature Film Mahaul Theek Hai on the Punjab Police  became a chart buster.
The political system also became a target of his humour and satire and periodically he announced the formation of Hawala Party , Suitcase Party and Recession Party with a manifesto in place with party symbols like, Drugs, Opium and Liquor.
He died in a Car accident at Shahkot near Jalandhar while travelling at night on 25th October, 2012 aged 57, just a day before his film Power Cut was to be released.
He was awarded Padma Bhushan posthumously in 2013.
Our humble tributes to the great Actor and Television personality !
Posted by aarkay at 2:21 AM