REMEMBERING AN ACE MOUNTAINEER AND AN OUTSTANDING SOLDIER: 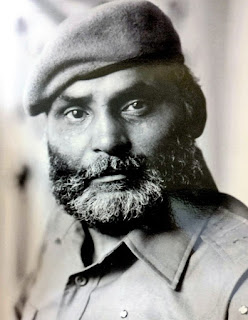 late Sixties, one fine day, in the  Morning assembly  of  our S.D.Higher Secondary School, Shimla, we were face to face with a smartly turned out gentleman in Suit & Tie, who was introduced by the Principal as Lt.Col. N.Kumar , an old alumnus of our school who had scaled  Mount Everest in 1965. He made an inspiring  speech which was listened to with rapt attention, the eyes glued to him throughout.

As it happens , the matter remained embedded in our psyche , only to surface again when we read about him in newspapers on various occasions.

Col. Narendra 'Bull' Kumar , PVSM ,AVSM, Kirti Chakra, Padmashri, was born on 8th December, 1933 at Rawalpindi in undivided Punjab. He attended a Scouts Jambori in 1947 at Russia and returned to a partitioning India, the ship dropping him at Bombay ( today's Mumbai ).

He was commissioned in the Indian Army in 1954 and got Kumaon Regiment. Developing an interest in the mountains and mountaineering, he completed a course in Mountaineering at the Himalayan Mountaineering Institute, Darjeeling. Subsequently he became the deputy  chief of the Expedition that scaled Mount Everest in 1965. Besides, he was a part of the Expeditions to Karakoram and Saltoro Mountains.

He is also known and remembered for the Operation Meghadoot, in which due to his reconnaissance operations in Siachen , Indian Army was able to reclaim the Glacier territory. This earned him the sobriquet 'Hero of the Siachen'.

As for the sobriquet 'Bull' attached to his name, the same was earned by him during a Boxing bout with a  fellow soldier S.F.Rodrigues, the future Army Chief.

He authored a few books also.Col.Narendra Kumar was also an Arjuna Awardee .

The Wikipedia makes no reference to his education etc, and only has a passing reference to the fact of his family shifting to Shimla after partition.

Our humble tributes to the distinguished  soldier and mountaineer !