Today is the birth centenary of Kamal Amrohi, the noted film director,producer, screenwriter and dialogue writer of Hindi cinema.Born Syed Amir Haidar Kamal Naqvi this day in 1918, he started his career in 1938 with Sohrab Modi's Minerva Movietones and was associated with movies like Jailor, Pukar, Bharosa and Shahjahan. He made his debut as a director with the 1949 film Mahal starring Ashok Kumar and Madhubala, which was a musical hit.He wrote dialogues for the film Mughal -e- Azam and received an award for this. 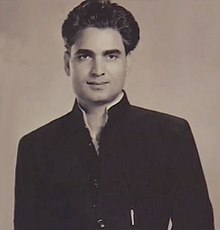 He directed only four movies namely Mahal, Dayara, Pakeezah, and Razia Sultan and left his mark. In fact, Pakeezah was conceived as early as 1958 but could see the light of the day only in 1972, with Meena Kumari as the lead actress and Raaj Kumar replacing Ashok Kumar who was earlier envisaged as the hero.The movie immortalized Meena Kumari and this was her swan song as well . This was the best Amrohi could have done for Meena Kumari, who was his estranged wife too.
Kamal Amrohi died on 11 February, 1993 aged 75.
Our humble tributes to the great film personality !
Posted by aarkay at 8:17 AM