Today is the death anniversary of Bhagwan Dada, or Bhagwan for short, the film Actor and Director. Born Bhagwan Abhaji Palav on on 1 August, 1913, in the beginning he had to do odd jobs to make a living and also worked as a labourer. The lure of films was too strong for him to resist and he turned to film making despite modest means. 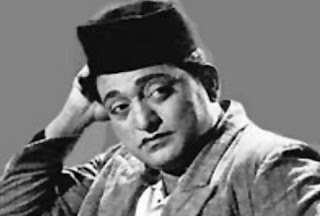 He is known for his own film Albela and also for his role in the film Jhanak Jhanak Payal Baje, Jhamela,Tarana & Chori Chori.The popular song Shola jo Bhadke Dil Mera Dhadke was picturised on him.He was mostly cast in the comic role and that of a simpleton.His last days were spent in penury living in a chawl.
He died this day in 2002 .
Our humble tributes !
Posted by aarkay at 2:49 AM