Today is the death anniversary of Basu Bhattacharya, the well known film Director of Hindi Cinema.He started his career as an assistant to Bimal Roy in films Madhumati and Sujata.He shot into fame with Raj Kapoor- Waheeda Rehman starrer 1966 film Teesari Kasam, which won the National Award for the Best Feature Fillm in 1967.Ironically the film was not a success at the box office. 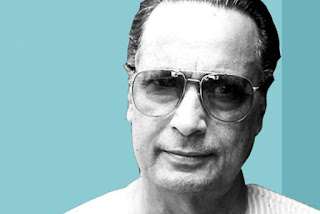 His another noted film that won critical acclaim was Aavishkaar, the Rajesh Khanna- Sharmila Tagore movie.Rajesh Khnna won the Filmfare Best Actor Award for this film.Another film Anubhav won the second Best Feature Fillm Award.The film Sparsh produced by him in 1979 won him the National Award for the Best Feature Fillm in Hindi and also the Filmfare Best Movie Award.
Basu Bhattacharya was also a member of the Jury at the 12th Moscow International Film Festival.
He died this day in 1997 aged 63.
Our humble tributes !
Posted by aarkay at 2:50 AM