Lilies of the Valley

LILIES OF THE VALLEY
Collection of Essays  by
Lily Swarn
Publishers :Authorspress, New Delhi
ISBN 978-93-88008-52-5
Pp:            117
Price:   Rs 250/-
Lily Swarn is a well known name especially in the English  language Literary circles with a  collection of poems    ‘ A Trellis of Ecstasy ‘, published last year . The poetry collection was well taken by the poetry lovers home and abroad and earned rave reviews in the printed mainstream  media as well as the social media. A formidable presence on the literary scene now, so far as poetry in English is concerned ,her poems have been translated into many Indian and Foreign languages . A winner of the 2016 Reuel  International  Prize for poetry, she has had  the honour of being invited as a distinguished  guest  at many conventions and conferences . The back page of the Cover of the book under discussion sums up her noteworthy achievements.
‘LILIES OF THE VALLEY’ has an excellent   Foreword by Ashok K. Bhargava , President Writers International  Network, Canada, followed by ’You cannot Hide Lily among the Thorns ‘  a beautiful poem by  Dr. Lanka Siva Rama Prasad, a medical  specialist , which shows us the various aspects and manifestations of the Lily flower  and which according to me could by extension mean Lily , the  writer of these essays   showing her many  shades ,  moods and views  through these nuggets . This also extends to the title of this collection. The Prologue by the author gives a peep into the background of this collection coming up ,describing  the churning ,  creative process .
The writer has dedicated this collection to the memory of her dear mother, who departed on the Valentine Day in 2016
It  is a collection of fifty essays covering  diverse topics and written in her inimitable style .The topics chosen are of wide range and spectrum , and relate to objects, emotions, feelings , relationships, habits  and what not .While the writer seems to have a different take on  some of the  subjects, she adds a new dimension to many others    Interspersed with  lines from Hindi, Urdu and Punjabi poetry, befittingly and deftly made use of , the essays make an absorbing  reading.The references to various authors and books even  from other languages that enrich the text  also  show that the writer is well read .
The very first essay  ‘Gossip’ sets the tone and  the writer is unsparing of the  male of the species for they also   indulge in this favourite pastime like women , who unfortunately being singled out , bear the burden of  reputation for this.Gossip may not always be a lie and could contain a grain of truth that  need not be told.  And who can deny the infectious genuine ‘Smiles’  that have the healing effect, while the artificial plastic smiles could painful to the person sporting them.  .The topic of ‘Love’  has been dealt twice with different  description and dimensions. ‘Coffee, Tea  Or Me’ deals with the subject close to my heart . While the mention of Indian Coffee House  pleases me no end, she has the last word when she sums up the brew ideally  ‘ Black as the devil, hot as hell;pure as an angel , sweet as love’ One can feel and savour the aroma throughout .
‘Dawn’ dwells on what a late riser  might miss out on, given the salubrious fresh morning breeze and the sweet cooing of the Koel that always has the magic effect of lifting the mood and the spirit.
‘Hypocrisy’ dissects the false hoods  in the expletives and hyperbolic expression of love .
‘Tree’ appears as a persona in  the beautiful essay, symbolizing objects of love . A lone tree could also mean a forlorn lover or simply a person without company.
In  ‘ Raqs’  suggestively  titled so, dance is not mere entertainment like Giddha . There is a spiritual and religious dimension to it. The terms ‘raqs-e anaa’ &  ‘ raqs-e- sharar’   are an addition to my knowledge and vocabulary .
‘The “F” Word ‘  meaning  Fat is the most abhorred  word these days , a detriment to health , looks, well being and self esteem . This has been beautifully brought out by the writer in this essay. Laced with her own wedding time experience , there is an express  longing  for the  old times , when the  painter  Peter Paul Reuben painted the perfect  woman. She quotes from a   Hindi film song  that celebrates a ‘ fat biwi’.
‘Diseases of the Soul’  presents inter alia the example of one Mr. Bajaj , a nonagenarian with extraordinary zest for life.
‘Tears’ discusses the ‘most potent weapon’ in altogether a different light . The writer does not fiorget to mention the famous  Folk song from Chamba,  ‘ Kapde dhowan nale rowan kunjua….’ to my utter delight.
‘Father’ is discussed on the expected lines, as  the writer seems to me ‘a father’s daughter’  bearing physical facial resemblance to him.
‘Moustaches’  comes with some amount of research and a touch of humour
In short , the writer treats us  with  a wide gamut of subjects, covering  objects ,  emotions , feelings….etc . Some of the essays are philosophical  and are a result of  serious introspection
The essays though short and crisp never grow terse . Further the references and quotations from various sources like lines from Urdu poetry, Hindi songs, Punjabi sayings and adages   are woven into the text with dexterity and the total impact is just amazing.
I ,for one,  am left wonderstruck like the villagers   in Oliver Goldsmith’s poem ‘ The Village Schoolmaster ‘
‘…..That one small head could carry all  (s)he  knew ….’
A reader's delight  !!
The taste of pudding is in the eating , so why wait  ! 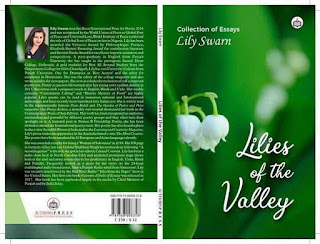