Today is the death anniversary of Hrishikesh Mukherjee aka Hrishi da, the renowned Film Director and Screenwriter, next in prominence only to Satyajit Ray, a fellow Bengali.
Born on September 30 , 1934 at Calcutta in Bengal Presidency ( now Kolkata in West Bengal), he directed 42 movies in a career spanning four decades.
He is considered a pioneer in ' middle cinema', as he struck a middle path between extravagant romanticism of mainstream cinema and stark realism of art Cinema. This accounts for the mass popularity and appeal of his films. 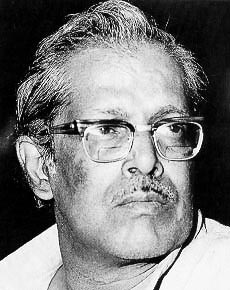 His outstanding filmography includes films like Musafir, Anari, Anuradha,Chhaya, Asli Naqli,Aashiq, Anupama,Gavan, Manjhli Didi, Ashirwaad, Satyakam,Anand,Guddi, Bawarchi, Abhimaan,Chupke Chupke,Mili ,Aalaap,Golmal, Khoobsoorat and many others.
He remained a Chairman of Central Board of Film Certification and National Film Development Corporation.
A recipient of Dadasaheb Phalke Award in 1999,he was also awarded Padma Vibhushan in 2001.
He was also a winner of 8 Filmfare Awards and 7 National Awards.
He died this day in 2006 aged 83.


Our humble tributes to the legendary Film Director !
Posted by aarkay at 2:54 AM