Today's Google doodle informs of the 133rd birth anniversary of Dr. Muthulakshmi Reddi,the  first woman legislator in India. She was appointed a Member of the Madras Legislative Council in 1927. She was also the first woman student to be admitted to a men 's college. She also became the first woman to be appointed a House Surgeon in India, when she joined a  Hospital in Chennai in 1912. She was also the first  to be appointed a Chairperson of the Women Welfare Advisory Board.
A Padma Bhushan recipient, as a Women's Rights activist,she did a lot  in the field of social reforms and the upliftment of women.
She died on 22 July, 1968 aged 81 .
Our humble tributes to the remarkable woman ! 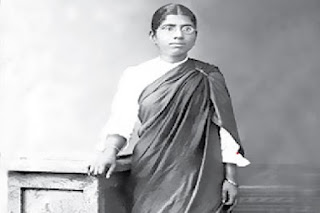