Today is the  birth anniversary of Mohammed Aziz,the popular Playback singer of Hindi , Bengali and Odia cinema. Born Syed Mohammed Aziz-un- Nabi this day in 1954 at Guma in 24Pargana District of West Bengal, he started singing at a very early age. His debut came  with Bengali film 'Jyoti'.
He shifted to Mumbai in 1984, and the same year he was given his first break by Anu Malik in Amitabh Bachchan starrer film Mard  .Later he became a favorite of composers Laxmikant Pyarelal who made him sing some beautiful melodies. His career in Hindi films came to a halt when Laxmikant Pyarelal left the scene. Other composers promoted the likes of Kumar Sanu and Udit Narayan. Mohamned Aziz lent his voice to Amitabh Bachchan, Govinda, Rishi Kapoor, Mithun Chakravorty, Anil Kapoor and Sunny Deol.
He sang some beautiful duets with Lata Mangeshkar, Asha Bhosle, Anuradha Paudwal & Kavita Krishnamurti.He recorded about 2000 songs in all.
A versatile singer, he dabbled in Hindustani Classical, Jazz,and Pop music also and was one of the rarest singers capable of singing in the ' saatwan sur'.
He died last year on 27th November, aged 64.
Our humble tributes to the talented versatile singer ! 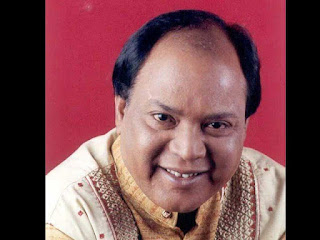