Today is the birth anniversary of Late Prithvi Raj Kapur, the doyen of Hindi Cinema and patriarch of Kapur family, whose fourth generation is now in acting . Prithvi Raj Kapur was not only a great actor but also a great theatre personality , a founder-member of IPTA and the founder of Prithvi Theatre.A highly talented actor, he acted in silent movies also.He had a supporting role in the first talkie Alam Ara. 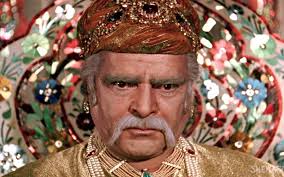 His role in Vidyapati brought him accolades and later his role in Sohrab Modi's Sikander catapulted him to fame . He is remembered most for his stellar role in Mughal-e- Azam, the block buster movie of the times and his role in the film Harishchandra Taramati was also highly appreciated. He had the lead role in Punjabi movies- Nanak Naam Jahaaz hai & Nanak Dukhiya Sab Sansaar and left a bench mark in acting.
He was a recipient of Padma Bhushan and Dadasaheb Phalke Award.


Our humble tributes to the legendary film and theatre personality !
Posted by aarkay at 7:18 AM