Today is the birth anniversary of Raja Rao, the doyen of Indian writing in English . Together with Mulk Raj Anand and R.K.Narayan , he constitutes the formidable triumvirate of Indian writers, writing in English and among the first being published abroad.
His novel ‘Kanthapura’ written in 1938 was an epoch making work, being the first major novel written in English. It is a microcosm of the Indian village life in all its evils and idiosyncrasies. Kanthapura , a small nondescript village beset with social evils like untouchability, and blind faith , under Gandhi’s influence plunges itself into civil disobedience & non cooperation movements and becomes a model of passive resistance and non violence .The Gandhian way is propogated through hari katha, the traditional narrative mode. The events unfolding also show woman power asserting itself and working in tandem with the male residents of the village. In a way the novel also comes across an encapsulated story of struggle for Independence . 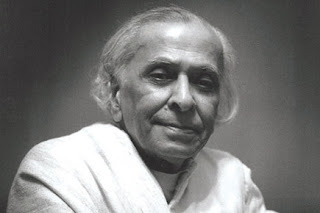 In ‘Serpent and the Rope’ Raja Rao juxtaposes the illusion and the reality , the two important ingredients of Indian Culture and is a journey in search of spiritual truth in Europe and India.
Raja Rao emerged as a nationalist novelist , despite the later part of his education being in Paris. He was deeply influenced by Gandhi and Gandhian ways and thought find a prominent place in his ‘Kanthapura’ and other writings as also his short stories. He also wrote a biography of Gandhi, called ’ The Great Indian Way: A Life of Mahatma Gandhi’, 1998.
Besides ‘Kanthapura’ and ‘The Serpent and the Rope’ he wrote three more novels , namely
‘The Cat and Shakespeare: A Tale of India’, ‘Comrade Kirillov’, and ‘The Chessmaster and His Moves (1988)’
Besides many collection of short stories, his non – fiction works include ‘Changing India: An Anthology (edited with Iqbal Singh),Tomorrow (edited with Ahmed Ali),Whither India? (edited with Iqbal Singh) and ’The Meaning of India, essays’
He was a recipient of Padma Bhushan, Padma Vibhushan, and Sahitya Academy Award.
Our humble tributes to the celebrity Writer !
Posted by aarkay at 4:59 AM