Today is the birth anniversary of Sitara Devi, a Kathak proponent and an eminent danseuse. Born this day in Calcutta on Dhanteras day in 1920,she was named Dhanalakshmi. She was initiated into dancing by her father and started performing on stage at a very young age. Gurudev Rabindranath Tagore seeing her perform on stage named her Nrityasamragyi, a compliment and a tribute to her dancing talent.International acclaim came to her when she performed at Royal Albert Hall, London and the Carnegie Hall New York in 1967 & 1976 respectively. 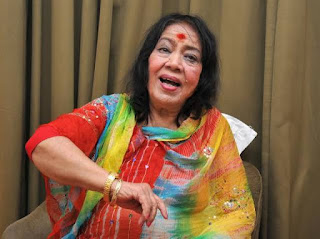 She also appeared in some Hindi film performing dance numbers.Known and celebrated as Kathak Queen, many awards and honours came her way.
She was a recipient of the coveted Sangeet Natak Academy Award and Padmashri.
In later years when she was nominated for Padma Bhushan award, she declined it calling it more an insult than an honour.
She died on 25th November, 2014 aged 94.
Our humble tributes !
Posted by aarkay at 4:53 AM