Today is the birth anniversary of Salim Ali , a renowned ornithologist and naturalist. He was an avid bird watcher and did extensive and systematic survey of birds at a number of places in India and made a pioneering study of various species and their behavior and habitat and came up with various books on the subject. He is credited with the formation of Bombay Natural History Society and the creation of Bharatpur Bird Sanctuary. He co-authored the ten volume Handbook of the Birds of India and Pakistan, along with Sidney Dillon Ripley , which is considered a classic. 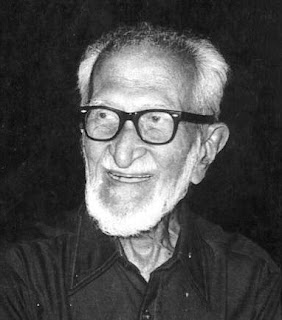 It is interesting to note that Salim Ali , who as a youngster went about hunting and killing sparrows became their preserver , later in life. However even during his hunting sprees also, he made useful study about sparrows. His visit to Burma in connection with the family business brought him more in proximity with nature and forests. Back in Bombay, he , along with Commerce and law studies , pursued Zoology also. He went to Germany also and conducted studies in ornithology along with some experts there.


Many species of birds bear his name as also some Parks and Institutes.
He was a recipient of Padma Bhushan and Padma Vibhushan.

Our humble tributes !
Posted by aarkay at 4:51 AM