Today is the birth anniversary of Suneel Dutt, the highly popular Actor of Hindi Cinema. He was also a Producer and Director.
Born Balraj Dutt this day in 1929, he started with  the Radio Broadcasts and became  very popular while working for the Hindi Service of Radio Ceylon, now known as Radio Srilanka.
He made his acting debut in 1955 film Railway  Platform. With large impressive eyes , 6 ft 2 inch height with a physique to match, he was a natural choice for dacoit centric and Thakur type roles . He became equally popular in lead romantic roles.Fame came to him early with a role in the iconic film Mother India, he playing the son of Nargis, his future wife.
It is said that  love happened between the two actors in the same film when Suneel Dutt saved Nargis's life in a fire accident during the shooting.
Another film for which Suneel Dutt is also remembered is his own  production- directorial venture  Yaadein, the 1964 movie in which he was the only Actor, with Nargis appearing only in a silhouette in the  starting scene.The film won the best Hindi  Feature film Award . 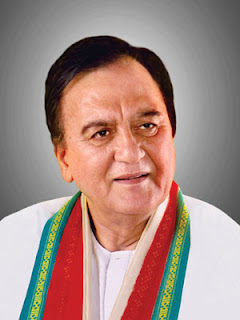 The films in which he acted include Kundan, Ek Hi Raasta,Kismat Ka Khel,Mother India, Sadhana, Sujata,Insaan Jaag Utha,Ek Phool Char Kaante,Hum Hindustani, Chhaya,Gumrah, Mujhe Jeeney Do,Nartaki, Yeh Raastey Hain Pyar Ke,Beti Bete,Ghazal, Khandaan, Waqt, Mera Saya, Humraaz, Milan, Padosan,Chirag, Reshma Aur Shera,Geeta Mera Naam, Jaani Dushman, Dard Ka Rishta, Raj tilak, Munnabhai MBBS, Rocky... and many many others.
As an Actor turned Politician, he was five time elected MP from Bombay North West constituency and also had a stint as the Union Minister for Youth affairs and Sports.
A recipient of Padmashri, he also received many other honours and Awards.
He died on May 25, 2005, aged 76.
Our humble tributes to the gentleman Actor  !
Posted by aarkay at 2:50 AM