A little more than two years back, I had  written a post about Bruno, a pet ,a German Shepherd in the immediate neighborhood who to the surprise of all had become friendly with  us instantly when we relocated some seven years ago- just a casual visit , a round of the house feeling every nook and corner inside and smelling & sniffing us.One known to be a terror for casual visitors and strangers adopted us in no time.No unwanted person could dare enter the compound or the vicinity. Faithful to the core, like perhaps all canine pets are, the owners would leave the house unbolted and unlocked, to his care.
Bruno, that's the name by which he was called disappeared last month. He disappeared first on 21st , remained somewhere hidden and not traceable on 22nd but was spotted nearby on 23rd and brought , with an eye injured and bruised.As usual on 24th in the early morning he went out for jungle pani ,this time never to return.  A week long search proved futile as he was nowhere to be found. Maybe some Big Cat took him. 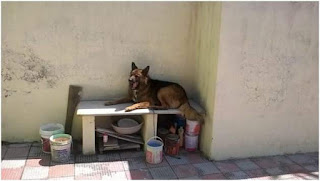 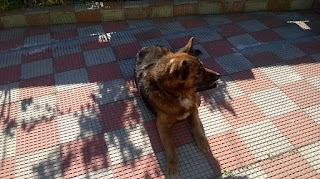 I have resisted writing about him sharing the hope and optimism of the owners and others in the neighborhood that he would return home taking everyone by surprise but alas !
Now there is no check on unwanted passers by, with monkeys and langurs having a field day causing all types of nuisance .
Missing you Bruno , you have been such a darling  !
Posted by aarkay at 4:21 AM