Today is the first death anniversary of Shashi Kapoor, the famous Bollywood actor, producer and director. Youngest and also the handsomest of the three sons of Prithvi Raj Kapoor, he had been active both in theater and cinema and has also worked in English movies like Shakespeare Wallah and Siddhartha. He started his career acting in Prithvi Theatre,his father's theatre Company.Turning to films,he acted as a child artiste in Aag(1948) and Awaara(1951).He also had his stint as an Assistant Director and a Director. While working in theatre in London, he came across theatre artist Jennifer Kendal whon he eventually married.Together they nurtured Prithvi Theatre and acted in many plays. 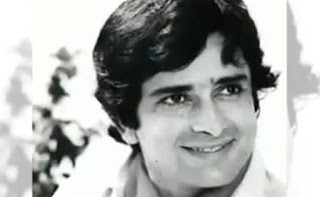 A versatile actor, he acted as a hero , a villain, and a character artist, across the entire spectrum of more than 150 movies he acted in.His first lead role was in 1961 film Dharamputra, which met only with partial success.This made him turn to Western Cinema but soon He returned to mainstream Hindi Cinema.  He paired most successfully with Nanda, the actress with whom he worked in eight movies, the most popular one being Jab Jab Phool Khile.He had lead role in about 60 films,the others being second lead and in multi starrer films.Most of the time he was cast in Romantic and positive roles. The songs picturized on him also became popular hits.His filmography includes, Dharamputra, Jab Jab Phool Khile, Deewar, Fakira, Neend Hamari Khwaab Tumhare, Mehandi Lagi Mere Hath Re, Kabhi Kabhi, Raja Saab , Rootha Na Karo , Satyam Shivam Sundaram, Suhaag and many many others.
He was third of the Kapoor clan to receive the coveted Dada Saheb Phalke Award and was also a recipient of Padma Bhushan.

Our humble tributes to the highly talented film and theatre personality !
Posted by aarkay at 5:26 AM