Today is the birth anniversary of Ramanand Sagar, the popular Bollywood film Director,  Producer and Writer. He was born Chndramauli Chopra this day in 1917 at Lahore  in undivided Punjab.He was adopted by his maternal grandmother,who had no son and it was during this time that he was given the name Ramanand Sagar. He did odd jobs to make a living and alongside studied to obtain a degree.A Gold medalist in Sanskrit and Persian from Punjab University, he became an Editor with the Daily Milap. 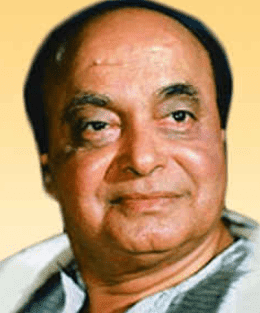 He wrote plays, short stories, poems and novel under the name Ramanand Bedi, Ramanand Chopra & Ramanand Kashmiri at different times.Falling a victim to Tuberculosis,he wrote a column ' Diary of a TB Patient'  which was publish in a magazine in Lahore.He got associated as an Assistant Stage Manager with the Prithvi Theaters and also directed some plays. He wrote the story and screen play of Barsaat, the popular Raj Kapoor -Nargis blockbuster.He started his own production & direction Company and gave many wonderful films.
His filmography includes notable films like Sangdil, Raj Tilak, Arzoo, Mem Sahib,Paigham, Ghoonghat,Rajkumar, Zindagi, Aankhen, Geet, Lalkar,Charas, Prem Bandhan, Salma and some others.
Turning to Television in 1985, he produced Ramayan,the most popular TV serial of its time.He also produced TV serials Vikram & Betaal,Krishna, Alif Laila, and Luv Kush.
He was awarded Padma Shri in 2000.
He died on 12 December , 2005 at Mumbai, 17 days short of completing his 88 years.
Our humble tributes to the multi talented film personality !
Posted by aarkay at 5:03 AM