Today is the 90th birth anniversary of Anant Pai, popularly known as Uncle Pai, a pioneer in  publishing comic books for Children. He was born this day in 1929 at Kar kala in present day Karnataka.
Having lost both his parents at the age of two, he was brought up by his maternal grandfather. He studied Physics, Chemistry, and Chemical Technology at the Bombay University , and earned Degrees .
He was interested in comics from the very beginning . He landed a job in Times of India and remained associated with comic strips like Mandrake and  Phantom that appeared in the paper.
Subsequently he left the job and created & founded Amar Chitra Katha, a comic series for children, which retold the stories of Indian Mythology, and projected great Mythological figures and other historical personalities . His other ventures included Tinkle, another comic series containing short stories, jokes and other educative material for Children. A popular figure on the Comic publishing scene, he won recognition and received many Awards & honours.
He was also called the Walt Disney of India.
He died on 24th February 2011 aged 81.
Our humble tributes ! 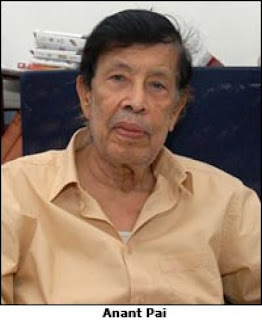