SUNDAY MUSINGS :
The other day social media carried the photograph of a couple leisurely walking amidst greenery. The gentleman carrying a kilta on his back and his wife carrying their kid. But for the details appended to the picture, I would have just glossed over , thinking it a  routine click from North- East India.
As it turned out , the gentleman is Ram Singh IAS, holding the coveted post of a Deputy Commissioner in West Garo Hills  district in Meghalay. It is stated that he walks on foot 10 km to buy fresh vegetables from the village and carries them on his back as the picture shows.
It was further mentioned that he belongs to Jahalma village of district Lahaul & Spiti. He holds a degree in Engineering, and had a stint  in the  Merchant Navy prior to joining the IAS in 2008. His brothers is also in the IAS.
One gets floored with such simplicity and down to earth, polite and humble demeanour , rare to be found in persons holding high office in the Government, generally seen to be stiff necked, haughty and arrogant,  be they bureaucrats or technocrats. As a Himachali, I feel proud of him.
------------
Navratri , the nine day festival devoted to the nine manifestations of Goddess Durga, starts today, with some of the devotees observing fast on all the nine days.Those who donot observe fast at least become abstemious shunning non vegetarian food for these nine days. The Navratri culminate with Dassehra falling on the tenth day. Durga pooja is more prevalent among the Bengali people. The local Kali Bari temple at Shimla these 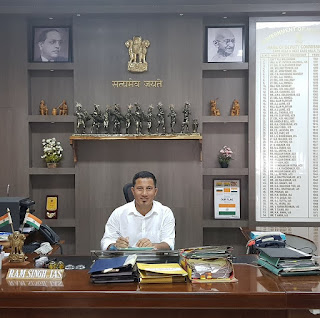 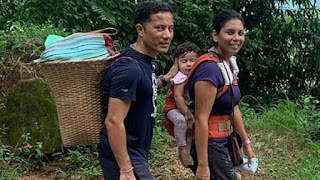 days is  full of devotees visiting and paying their obeisance to the Goddess.