THIS DAY TWENTY YEARS AGO: 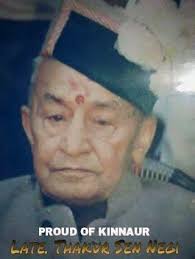 As I woke up to the New Year Day in 2001 at Reckong Peo, the District HQ of Kinnaur, a telephonic call from the Deputy Commissioner, Solan informed me of the sad demise of Sh . Thakur Sen Negi , at Salogra, where he used to stay. Sh. Negi is a revered name in Kinnaur, who being an IAS officer had retired  as the Chief Secretary to H.P.Government in the '60s. Joining politics post retirement, he was a five time MLA from the Kinnaur Constituency and had  been twice a  Speaker of H.P. Vidhan Sabha and once a Cabinet Minister. The Deputy Commissioner Kinnaur was  out of the District on tour. The District had suffered flashfloods  in August 2000, which had caused massive damage to the National Highway , bridges buildings and private land along the Satluj river. The restoration work  was underway and  the road had not been restored.

I made a call to Sh . Subhash Negi, a very Senior , affable and approachable IAS officer to inform him of the prevailing situation. He asked me not to worry as he would  handle the  situation . Since it was not possible to bring the mortal remains to his native place in Kinnaur, he was accorded  funeral as per protocol befitting his status, at Shimla with many VIPs in attendance.

Sh. Thakur Sen Negi  was a highly respected leader and a person known for his impeccable credentials both as a senior Bureaucrat and a politician. Known for his intelligence, learning , honesty and punctuality , he was held in esteem by all, cutting across party lines.

He was associated at different times with the Congress, Janata Party and lastly the BJP. He did a lot to meet the aspirations of the tribal people and also wrote a book about the Scheduled Tribes of Himachal Pradesh.

He was a B.Sc.(Agriculture) from Lyallpur Agriculture College and had a degree  in Law. He had served as a Naval Officer and a Tehsildar before getting inducted into the IAS. I had the opportunity to meet him when he visited  Kinnaur in 1998. The Government Degree College Reckong Peo  bears his name and  there is a statue erected in his honour at Reckong Peo.

Humble tributes to the highly respected person and an iconic personality !