Today is the birth anniversary of Amjad Khan, the popular Bollywood actor.He is mostly known for his stellar performance as Gabbar in 1975 block buster 'Sholay',and his dialogues like' kitney aadmi the' were on the lips of almost everyone who saw the movie.Not only this, the dialogues were repeated and used at many places and on many occasions to add effect. He was mostly cast as a villain.He acted in about 130 films. Apart from ' Sholay' his another remarkable performance was as Dilawar in 'Muqaddar ka Sikandar'.
He started playing minor roles in films in 1951 and the name of the first film was Nazneen.Next he worked in a movie called Ab Dilli Door Nahin , when he was just seventeen.He had a small role in K.Asif's Love and God.His first film as an adult was Hindustan Ki Kasam. 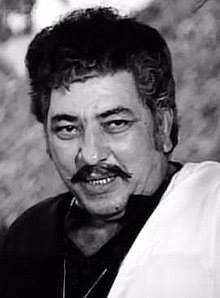 He also played comic roles in films like Qurbani , Love Story and Chameli Ki Shadi and become immensely popular.
He had outstanding performance in films like. Shatranj ke Khiladi, Yaarana and Lawaaris.He also worked in a Hollywood flick The Perfect Murder.
One of his directorial ventures 'Chor Police' did well at the box office while the other 'Ameer Aadmi Gareeb Aadmi' flopped.
He was a respected man in the film industry and is known to have resolved disputes among actors.He died in 1992 aged 51.
Our humble tributes to the great, versatile and talented actor !
Posted by aarkay at 5:29 AM