Today is the birth anniversary of Johnny Walker, the celebrated comedian of Bollywood. Born Badruddin Jamaluddin Kazi, in Indore, circumstances brought the family to Bombay. His father being left out of work, Johnny Walker became the sole bread winner of a large family consisting of parents and his nine siblings. He tried his hand at various things, and finally settled as a bus conductor in BEST. Bitten by the acting bug early in life, he used to practice the antics and stunts of the actors he had seen on screen. His acting talent was spotted by Balraj Sahni , when he saw Johnny Walker, entertaining the cast of movie ‘Hulchul ‘-with extempore acting as a drunkard. Incidentally a very small role had come his way in that movie. It is said that Balraj Sahni asked Johnny Walker to perform before Guru Dutt . This brought a role for Johnny Walker in Guru Dutt’s movie ‘Baazi’ and his career in films took off. The name Johnny Walker was given to him by Guru Dutt at this point in time and the name stuck. 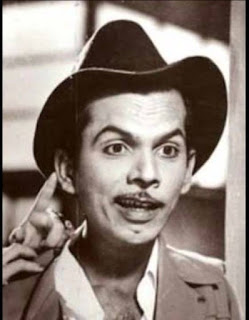 He acted in all movies of Guru Dutt except perhaps one . Johnny Walker acted in many movies . The films Mere Mehboob, C.I.D, Pyaasa and Chori Chori catapulted him to fame and popularity and he became a star. He was at the pinnacle in the 50s and 60s , however suffering a jolt with the death of Guru Dutt in 1964. He acted in the films of Bimal Roy and Vijay Anand also.
He gave a stellar performance in Naya Daur, Madhumati and Taxi Driver .
Educated only upto the sixth education he saw to it that his children receive the best education home and abroad.
He became a symbol of harmless, pure comedy , depending mostly on facial expression , body movements and excellent delivery of dialogues . No innuendos or double meaning entendres were to be seen in his comedy. It is to his credit that no single line was ever cut by the Censor in his dialogues. He acted in about 300 movies.
He won the Filmfare Best Supporting Actor Award for his role in Madhumati and the
Filmfare Best Comedian Award for his role in Shikar.
Our humble tributes to the great actor and a fine gentleman !
Posted by aarkay at 8:32 AM