Today is the death anniversary of Manohar Singh, a highly talented theatre and film actor.Starting as an artiste in village folk theatre in Shimla, he participated in plays staged at Amateur Dramatic Club, Gaiety Theatre in Shimla before moving to National School of Drama, Delhi. He also had some training in Theatre at the Royal Society, London. 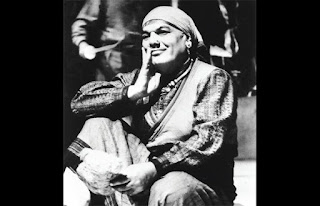 He is known for his memorable performance in plays - Tughlaq, Himmat Mai and Madam Berve.Before switching to cinema, he was Chief of Repertory at National School of Drama for twelve years.He is known for his role in films Party and Daddy.He also appeared in a TV serial Mulla Nasruddin.


The late Balwant Gargi, the famous theatre personality in his autobiography 'The Naked Triangle ' has praised Manohar Singh.
Our humble tributes to the great artist and Actor !
Posted by aarkay at 7:24 PM