A casual visitor to the village during school vacation or some other occasion, a visit to the Gharat was a must. Accompanied by some elder, who would carry on his back a bag made of goat skin called Khalta, filled with maize grain weighing not less than 2O kg, I would carry a small empty Khalta with a capacity of not more than 2- 2.5 kg and a small rope. The village had two gharats on opposite sides but I went to only the one preferred by the elders. A makeshift structure strategically made in the midst of a flowing Khad, with a roof overhead, with the sound of gushing water mixed with that of the grinding noise, was scary to a small kid that I was at that time.The owner of the Gharat, also known as Gharati would take the grains out of the bag and put them in a funnel above and open the channel of water supply. The grinding would be done with the grain being put on a rough and rugged stationary platform on which would rotate a stone disc , with a rough lower surface.The flour would collect on the surface. 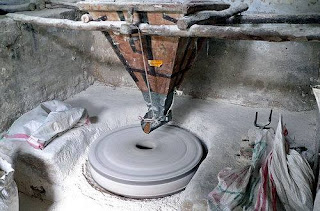 The grinding having been done, the Gharati would keep aside soe flour as the grinding charges in kind.The flour would be put in the two Khalta. The smaller Khalta was carried by me on my back tied with the rope in a typical manner, with a protective cover of cloth on the back lest it should hurt.
It was quite an adventure at that time.The maize or corn flour tasted damn good, though we were not much used to wheat flour grounded at the Gharat.
Now with electricity available in the villages, people keep domestic chakki at home. The grinding though much more convenient ,the taste of the flour is not as good as used to be of the flour ground at the Gharat.
(Picture courtesy: Google)
Posted by aarkay at 5:05 AM