Be it a slot reserved for a song in his voice  in the morning old songs' program broadcast by Radio  Ceylone decades back, or humming the lines of the song 'so ja rajkumari so ja' , by Lata Mangeshkar while presenting a program 'Jai Mala' on Vividh Bharati, or again the childhood fancy of the same legendary Lata Mangeshkar wanting to marry him when she saw him in 'Chandidas' or every budding singer of the time trying to emulate and sing in his style, K.L. Saigal towers  high as an all time great singer of Hindi cinema. In a career spanning less than fifteen years, he acted in 36 films including  seven Bangla films. 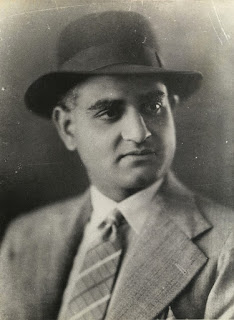 Among the 185 songs he recorded, 143 were for films and  42were non film songs. Before Bombay, Calcutta used to be the hub of Cinema.He was very popular in Bengal and it is said that only after listening him singing, the poet Tagore, approved his voice for Bengali songs, a rare thing for a Non- Bengali to have this privilege those days.Given to excessive drinking in his later years, his health deteriorated and  he died this day in 1947 , aged 42, at his native place Jalandhar.

Our humble tributes to the great singer - actor of his time !
Posted by aarkay at 3:21 AM