His filmography  includes films like Sholay, 1942 a Love Story, Aradhana,Kati Patang, Aandhi, Yaadon ki Baraat, Padosan, Amar Prem,Masoom, Ghar, Deewar, Aap ki Kasam, Teesri Manzil, Hum Kisi Se Kam Nahin, Hare Rama Hare Krishna, Kudrat,Satte Pe Satta, Kalia, Mehbooba, Saagar, Duniya, Anamika and many many others.
Kishore Kumar was his personal favourite and on his insistence  most of the songs of Aradhana were got sung by Kishore Kumar. It is common knowledge that Aradhana was the come- back film of Kishore Kumar, rather a shot in the arm for him.
R.D.Burman was married for the second time to Asha Bhosle, the renowned playback singer.
He died this day in 1994, not completing 55 years .
Our humble tributes to the great Composer and Music Director ! 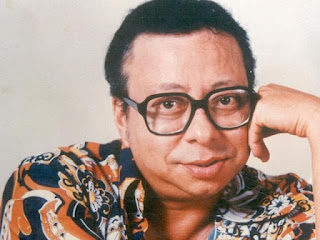