Today is the birth anniversary of  Nirupa Roy, a popular  Bollywood actress of  old times.She played lead roles in her early films  but was more popular in mythological roles. 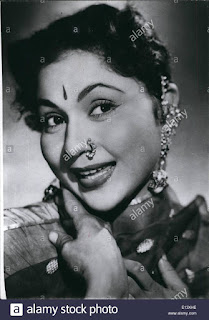 She played the quintessential mother in most of the films , even a mother to Amitabh Bachchan and Shashi Kapoor. She appeared in close to 250 films, the popular among them being Do Beegha Zameen,Munim ji, Rani Roopmati, Chhaya,Maa, Muqaddar ka Sikandar, Deewar,Amar Akbar  Anthony and many others. She roles she played were of a mother  impoverished and pathetic - one of the exceptions being the film Jai Chittor  in which she played a  Queen and did full justice with the role.
She also earned the sobriquet 'Queen of Misery' pointing to the roles she played.
She won many awards for her memorable roles.
Our humble tributes  !
Posted by aarkay at 1:58 AM