Today is the death anniversary of  Homai Vyarawalla,India's first woman photo- journalist. She was born on 9 December, 1913 at Navsari in Gujarat, to Parsi parents. She spent her childhood moving from place to place with her father's Theatre Company. Later shifting to Bombay, she received her education at the Bombay University and JJ College of Art. 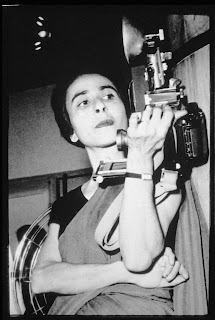 In the late '30s she started working and at the start of World War Il, she was associated with the Illustrated Weekly of India, which published Black and White clicked and developed by her.Her career spanned  almost four decades and she left the job after her husband's death.During her career she captured images of many historical figures like Gandhi, Nehru and Jinnah and won admiration for her photography.
She was a recipient of Padma Vibhushan.After losing her only son Farrukh to cancer in 1989, she lived a quiet, secluded life and died this day in 2012, aged 98.
Our humble tributes to the remarkable lady !
Posted by aarkay at 4:22 AM