Today is the birth anniversary of Khashaba Dadasaheb Jadhav, the Indian Wrestler, who won a Bronze medal in the 1952 Olympics held in Helsinki.He was the first Indian to win an Olympic medal in an individual event. 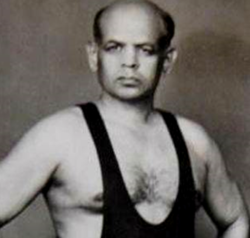 A recipient of Arjuna Award posthumously,he is the only sportsman among the Olympic medallists, who regretably didn't receive any Padma award.
He died on 14 August, 1984 aged 58.
Our humble tributes to the Great Wrestler also known as the ' Pocket Dynamo ' !
Posted by aarkay at 4:27 AM