Today is the birth anniversary of Mary Ann Evans aka Fearless Nadia, an Australian origin Indian actress and stuntswoman.She was born this day in1908,at Perth in Australia.She came to Bombay in 1913 with her father, who was with the British Army. After her father's death at the hands of Germans in 1915, the family moved to NWFP of present day Pakistan where she learned all the skills like hunting, riding, shooting. 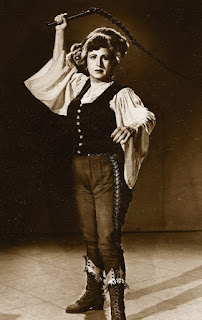 She returned to. Bombay in 1928, for some time was employed as a salesperson with the Army &; Navy Stores . She moved to theatre and became a theatre Artist.She made her debut in 1935 Indian film 'Hunterwali' which was the earliest female- lead film.In this Film she appeared as the masked , cloaked adventuress.She was married to Homi Wadia , an Indian Parsi film maker.
A biopic made on her in 1993 won critical acclaim .
Later, in Vishal Bhardwaj's movie Rangoon, a character inspired by her was played by Kangana Ranaut .
She died on 9 thJanuary 1996 a day after completing 88 years.
Our humble tributes !
Posted by aarkay at 2:02 AM