Today is the birth anniversary of the great Bollywood actor Ashok Kumar aka Dadamoni.Acknowledged as the first superstar of Hindi cinema , he was a highly talented actor of the class of other greats like Balraj Sahni and Moti Lal whom acting came naturally.
After a small role - which he got by default in film Jeewan Naiya, the real debut came in film Achhoot Kanya opposite Devika Rani,which was a block buster. and Vachan,all popular hits.Ashok Kumar's next heroine was Leela Chitnis,with whom he paired in movies like Kangan, Bandhan, Azad and Jhoola, which were popular hits.His stardom arrived with the 1943 film Kismet,the greatest hit of pre- independence era.
Ashok Kumar never looked back after that and in a career spanning six decades acted in popular hits like Saajan,Sangram,Mahal and Samadhi.His other notable films include Bandini, Parineeta, Bhai Bhai, Chalti ka naam Gaadi, Howrah Bridge, Ashirwaad, Victoria No. 203,Intaqaam etc etc.
He was a recipient of Padma Bhushan and Dadasaheb Phalke Award besides many other honours that came his way. 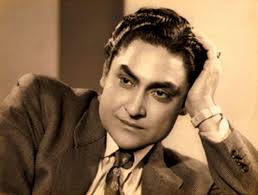 The pair worked together in films like Janmabhoomi,Izzat,Saviitri
Our humble tributes to the legendary actor !