Today is the death anniversary of Kishore Kumar, the multi-talented singer actor,performer, director and producer . Born Abhas Kumar Ganguli to Bengali parents in Khandwa, Madhya Pradesh, Kishore Kumar’s career spanned over a period of three decades during which, he acted in films, sang songs, performed on the stage as well as directed and produced films . 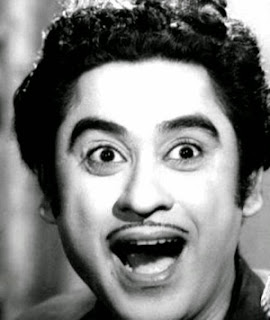 In Half Ticket, he also recorded a duet, himself singing in male and female voice ,which was a unique experiment.
The boost to Kishore’s singing career was given by the songs he recorded for the film Aradhana, which heralded the Kishore era of Hindi film singing . He sang memorable melodies for the films Amar Prem, Kati Patang , Aap ki Kasam,Anurodh, Muqaddar Ka Sikandar,ShahenShah, Mr.India, Sharaabi, saagar, Funtoosh , Nau do Gyarah , Sholay, Khushbu, Aandhi, Julie , Mili , Parichay, Abhiman, Andaaz, and many others.His duets especially with Asha Bhosle became very popular.
He was the first and perhaps only singer in Hindi Cinema to introduce yodeling in singing.
An eight time winner of Best Playback Singer award, he won many other awards and honours.
It is on record and a strange coincidence that his elder brother Ashok Kumar’s birthday also falls on 13th October.Taken aback and shocked by the death of Kishore Kumar , who was 19 years younger, Ashok Kumar stopped celebrating his birthday 1987 onwards.
Our humble tributes to the versatile and multi- talented personality !
Posted by aarkay at 9:39 AM