Today is the death anniversary of Ismat Chugtai, the doyenne of feminist writing in Urdu. Due to her bold , iconoclastic and progressive writings which were often termed scandalous by the prudish society , she courted controversy and even stood trial in the Lahore Court for alleged obscenity depicted in her iconic story 'Lihaaf' that was far ahead of the times when she wrote it in 1941.By coincidence, another celebrated story writer Manto was also facing trial for his story 'Bu'. Apart from 'Lihaaf', she also wrote another bold story 'Gharwali' which also invited criticism . 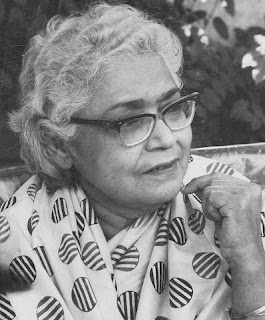 She was also a member of the Progressive Writers Association.
Her autobiography 'Kagazi Hain Pairhan' is recognized as a classic.
She wrote the story of the film Ziddi & Garam Hawa , screenplay and dialogues of film Arzoo, and dialogues of film Junoon.
She was a recipient of Filmfare Best Story Award and Soviet Land Nehru Award.
Our humble tributes to the celebrity writer !
Posted by aarkay at 9:03 AM