A star that shone on the firmament of the Indian cinema as an actor and a singer in the beginning and later became an iconic singer/ actor of Pakistan , Noor Jehan, born Allah Rakhi Wasai started singing at the age of five. Pushed into singing to continue the family tradition ,she learnt Hindustani Classical Music of the Patiala Ghrana from Ustad Bade Ghulam Ali Khan and was trained in Thumri, Khayal and Dhrupad. Initiated into singing by G.A. Chishti, her singing talent was recognized she started giving public performances . Endowed with good looks and sharp features,in due course she was offered role in films, thus fulfilling her cherished dream . Making her debut in 1935 as a child artiste , between 1935 and 1942 she acted in a number of films, probably 15 or 16. It was in 1942 that she was offered a role in film Khandan opposite Pran . The film became a hit and Noor Jehan got launched on an acting career. Between 1942 and 1947, she acted in films like Duhai, Naukar, Lal Haveli , Dost, Zeenat , Gaon Ki Gori , Badi Maa, Bhai jaan and some others but the films that catapulted her to fame as an actor and a singer were Anmol Ghadi, Jugnu and Mirza sahibaan. With the duet - Yahan Badla Wafa Ka Bewafai Ke Siwa Kya Hai – in film Jugnu Mohammad Rafi also got established as a full fledged playback singer. 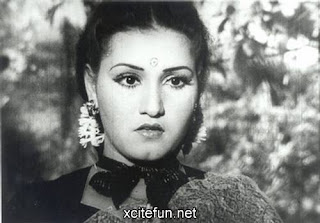