Today is the death anniversary of Dara Singh , once the World Wrestling Champion who turned actor and acted in a number of films. In my growing years, when I was in school, three four names were always mentioned by my classmates, and among wrestlers,the names of Dara Singh , his Brother Randhawa, and a rival King Kong were mentioned most of the time. He earned worldwide fame when he defeated King Kong . He won Commonwealth Wrestling Championship in 1959 by defeating George Gordienko at Calcutta and and the World Wrestling Championship in 1968 by defeating Lou Thesz at Bombay . He started his film career as early as 1952 when he acted in a film ‘Sangdil’. After doing stunts in many films, his first lead role came in ‘King Kong’, a movie made in 1962. Entering into a partnership with the actress Mumtaz in 1963, he did about 16 films with her. He acted as Bhim in the film Mahabharat and as Hanuman in the film ‘ Bajrangbali ‘ and also in the TV serial ‘Ramayan’. 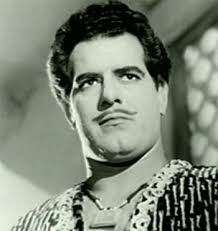 In many of the lesser known films he enacted roles mostly suited to his strong body , good height and physique, as is suggested by the title of the films. These included ‘King Kong’ ,’ Rustam-E-Baghdad’ ,’Lootera’, ‘Rustam-E-Hind’, ‘Sikander-E-Azam’, ‘Daku Mangal Singh’ etc. etc. He also worked in well known films like ‘Mera Naam Joker’, ‘Anand’, ‘Aankhon Aankhon Mein’, ’ Lalkar’ , ‘Sultana Daku’, ‘Jehreela Insaaan’, ‘Dharam Karam’, ‘Dharmatma’ and last but not the least ‘Jab We Met’. He acted in Punjabi films also .
He directed films like ‘Nanak Dukhiya Sab Sansaar’, ‘Rustam’, ‘Sawa Lakh Se Ek Ladaoon ‘,’ Mera Desh Mera Dharam’ . He also produced ‘Bhakti Mein Shakti’ and ‘Karan’.
He was the first sportsperson to be nominated to the Rajya Sabha and served his term between 2003 and 2009.
He died this day in 2012 aged 83 .
Our humble tributes !
Posted by aarkay at 7:22 AM