Today is the death anniversary of Madan Mohan, the legendary composer and Bollywood music director. Born on 25 June, 1924 in a reputed family, in the beginning he joined the Royal Indian Army as a Second Lieutenant during the second World War , but left Army after two years.After Army, he joined AIR Lucknow as Programme Assistant and came in contact with many famous artistes like Ustad Faiyaz Khan , Ustad Ali Akbar Khan , Brgum Akhtar and Talat Mehmood. He also recorded a few ghazals in his own voice. Joining the film line, he acted in a few films , but soon realized that composing music, particularly ghazals was his forte. He remained active for quarter of a century between ’50s and ‘70s and gave memorable compositions. He also sang two duets with Lata Mangeshkar for 1948 film Shaheed, which however were never used in the film. Making his debut with film Aankhen in 1950, he went on to compose music for notable films like Madhosh ,Railway Platform , Bhai Bhai, Pocket Maar, Raajdhani, Dekh Kabira Roya, Adaalat , Jailor, Khzanch, Anpad, Sanjog, Ghazal, Haqeeqat, Jahan Ara, Who Kaun Thi , Neela Akash, Mera Saya , Naunihal, Chirag, Dastak, Heer Ranjha, Laila majnu, and many others . 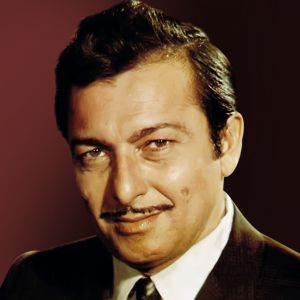 Some tunes composed by him were used many years later in the film Veer Zara. He made optimum use of the voice of Talat Mehmood Lata Mangeshkar , Muhammad Rafi and Manna Dey and gave unforgettable melodies. A song in the voice of Mukesh- Preet laga ke maine ye phal paya- also became quite popular.The ghazals and songs sung by Talat Mehmood deserve special mention.
He was nominated for the Filmfare A ward for Best Music director thrice, National Film Award for Best Music Direction for the film Dastak and also IIFA Award for Best Music Director.
He died this day in 1975 aged 51 only.

Our humble tributes to the maestro !
Posted by aarkay at 4:47 AM