Today is the birth anniversary of George Bernard Shaw , or simply Bernard Shaw as he insisted on being addressed, the acclaimed Irish playwright , ideologue and a culture icon. . Born this day in 1856 in Dublin , later he made England his home and during the last more than a decade of his life kept dual citizenship. In all he wrote about sixty plays . Saint Joan, Candida, Man and Superman, Major Barbara , Arms and the Man are some of his most famous plays. His wit, humour, satire, ideology, beliefs – all come to the fore through the various characters in his plays. In Saint Joan, the protagonist Joan of Arc , comes across as a bold woman with her satirical utterings and the repartee even in the face of sure death on being branded as a heretic. Arms and The Man, brings forth the futility of war and the famous concept of ‘chocolate soldier’ depicted in the character of Captain Bluntschli , who also emerges as a romantic hero in the play. 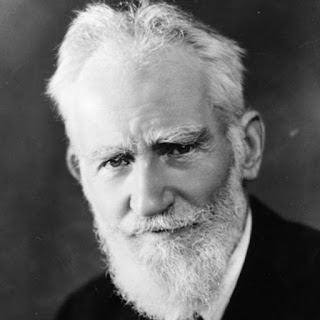 In ‘Major Barbara’ the theory ‘ ends justify the means ‘ finds discussion and enunciation. Bernard Shaw was a vegetarian with strong convictions. As for his wit , humour and intelligence, a story goes that one Isadora Duncan, a beautiful dancer , enamoured of his intelligence no less than with her own looks proposed to Bernard Shaw that together they beget children who will possess his brains and her beauty .To this Bernard Shaw quipped that he feared the opposite happening – children with her brains and his looks ! He was a strong critic of the game of Cricket .


Bernard Shaw won the Nobel Prize for Literature in 1925 and subsequently the Academy Award also, becoming the first ever person to achieve this dual distinction.
Blessed with a long life, he died on 2nd November , 1950, aged 94.

Our humble tributes !
Posted by aarkay at 7:00 AM