Today is the 92 birth anniversary of Guru Dutt, the iconic film Director, Actor and Producer of Hindi Cinema.
The larger than life persona of film actors has fascinated me since childhood-so much so that I always thought of them as above humanity- or immortal -so to say. It came as a shock when as a ten year old , the news of untimely death of Guru Dutt , was disclosed to me in the school itself , by a class pal of mine, who had heard the news on AIR during lunch break. Even his tone carried a streak of disbelief, as it was for the first time that we had heard about the death of an actor. I had not heard of Guru Dutt , but his death did cause a feeling of deep sorrow. Only a few months back, the same year the death of Pt. Jawaharlal Nehru, the Prime Minister had plunged the nation into shock and grief. 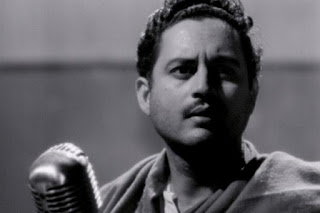 When I went home and disclosed that the actor had died, my parents told me that actors were also human beings and as such were destined to die one day like others. In later years, I heard of the death of Madhubala , Meena Kumari, Smita Patil …….. also at very young age, but by then had reconciled to the bitter truth.
But , metaphorically, actors and singers or other artistes for that matter never die , as they come alive through their films, creations and compositions any time we chance upon their masterpieces. One has only to see Guru Dutt’s movies like Pyaasa, Kagaz ke Phool, Chaudhawin ka Chaandand Sahib Biwi aur Ghulam, Bharosa, Bahurani,Mr. & Mrs.55 ,Aar Paar, Saanjh aur Sawera to feel the magic !

Our humble tributes !
Posted by aarkay at 5:07 AM