Today is the death anniversary of Mohammed Rafi , the legendary and popular playback singer of Hindi Cinema who sang in other Indian languages also. Born on December 24 , 1924 at village Kotla Sultan Singh of Amritsar district in Punjab, his singing talent was spotted at an early age . His public performance came early as at the age of 13 in Lahore. His debut as a playback singer was in a Punjabi film, Gul Baloch in 1941 . However the film was released in 1944. The same year the AIR Lahore invited him to sing for them . His first Hindi film as a singer was Gaon ki Gori in 1945. He sang a line in the song -Roohi Roohi Roohi Mere Sapnon Ki Rani – in the film Shahjahan , with Saigal as the main singer and the hero. Initially he was influenced by G.M. Durrani, whose singing style he followed but soon came out of this and evolved his own style.
He got established as a singer when he sang a duet- Yahan badla wafa ka bewafayi ke siwa kya hai - with Noor Jahan in film Jugnu. He also sang a song – Tera khilona toota Balak – in Anmol Ghadi.
Rafi was at the peak of his singing career during the ‘50s and ‘60s when he gave memorable hits. Music director Naushad was the first to recognize his talent and in his direction Rafi gave hits in films Baiju Bawra, Amar, and Mughal-e Azam. In the beginning he sang for Dilip Kumar but later S.D. Burman used his voice for Dev Anand. 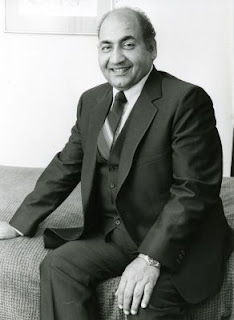 He sang for all lead actors of the time and for all music directors - Naushad, S.D.Burman, Shankar Jai Kishan, Laxmi Kant Pyare lal etc etc. A gifted singer with a marvellous range and variety , his voice suited all the actors. The lip synching of his songs by the actor on screen was wonderful. A humble and soft spoken person, he always spoke sotto voce but his voice could rise to a crescendo when the song so demanded. A trained singer, he sang all types of songs - sad, romantic, hilarious – and also classical numbers and qawwalis. His career graph showed a decline after the revival of Kishore Kumar with the film Aradhana in 1969. However in the same film he sang two memorable duets one with Lata Mangeshkar and the other with Asha Bhosle. He continued singing and gave some hits in the ensuing period of time also.
A contented man, he was not given to material gains and differed with the singer Lata Mangeshkar on the issue of Royalty. He lay no claim to any Royalty and was of the view that once the artiste had received full payment , there was no question of Royalty being given.
In all he sang more than seven thousand songs in all languages and genres.
A recipient of Padma Shri in 1967, many other awards and honours came his way one of them being recognized as the ‘ voice of the Millennium’ as late as 2013.
He died this day in 1980 in the 56th year of his life .
Our humble tributes to the great singer and a fine gentleman !
Posted by aarkay at 8:32 AM