Today is Rajesh Khanna’s death anniversary.
No larger than life persona was he made to portray , no superhuman feats was he made to perform; he was just made to play the role of the man next door , not invincible but vulnerable ,given to emotions and weaknesses like you and me , with whom one could easily identify.That was Rajesh Khanna. In fact this ordinariness made him extraordinary , endeared him to all and made him a superstar.
In late seventies, he along with other crew members had come to Shimla to shoot for film ‘Kudrat’- a Chetan Anand movie. On a holiday, probably a Sunday, I rushed to Chhota Shimla, to a place where shooting was going on . It was a shoot for a scene from dance-chorus number- Sawan Nahin Bhadon Nahin- with Rajesh Khanna and Priya Rajwansh in the lead . Priya wore a red dress with makeup to match and Rajesh Khanna, in a combination suit with spotted yellow tie was his usual smartest self . Aruna Irani in Kameez salwar looked like a typical Punjabi Bebe , Dimple Khanna , all grace was also there.
Both Priya Rajwansh and Rajesh Khanna are no more.
Making his debut in 1966 with Ahkri Khat , Rajesh Khanna gave hit after hit for many years reaching the pinnacle of popularity and stardom . His films like Aradhana, Aap ki Kasam ,Amar Prem , Do Raaste,Anand,Kati Patang, Bawarchi, Namak Haram, Haathi Mere Saathi, Mere Jeevan Saathi, Dushman became super hits. In fact in ‘Anand ‘ both Rajesh Khanna and Amitabh Bachchan shared the screen space and the limelight. Many of his films went on to become Platinum , Gold and Silver Jubilee hits. 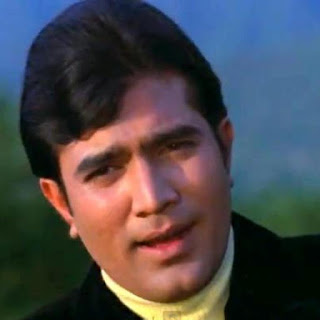 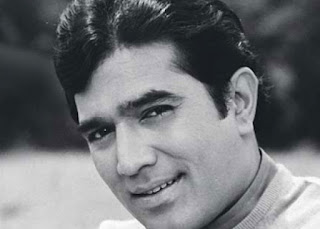 He paired well with all the popular heroines of the time i.e. Sharmila Tagore, Mumtaz, Asha Parekh, Zeenat Aman, Tanuja and Hema Malini and the movies were well received by the audiences. However he never got to work with Vaijyanti Mala, who had this regret as Rajesh Khanna according to her had perhaps arrived too late on the scene.
Rajesh Khanna acted in more than 150 films including short films.He produced three movies and co-produced four . The songs picturized on him became instant hits and won fame even for the playback singers. He was an elected Member of Lok Sabha for a term.
A recipient of Padma Bhushan, he was officially recognized as the first superstar of Hindi Cinema.
Unfortunately , the name , fame and popularity that he earned for himself was much more than he could handle and he died a loner and a recluse.
Our humble tributes to the legend !
Posted by aarkay at 4:21 AM