A TRELLIS OF ECSTASY

A TRELLIS OF ECSTASY
Poems by
Lily Swarn
Publishers :Authorspress, New Delhi
ISBN 978-93-86722-45-4
Pp: 236
Price: Rs 395/-
Lily Swarn‘s name became known to me only about a year and a half ago. It was perhaps in the month of February, 2016 that I chanced upon a poem posted by her on her Facebook Page . The poem caught my fancy being about the mental state of a young college girl making her way to/from an eating joint serving Chinese food , just alongside the stairs that lead from Baljee’s , the Mall Shimla down to Lower bazaar through Middle Bazaar. My hometown, Shimla being in the backdrop , the poem struck an instant chord with me. Facebook friendship followed and since then I have been a regular reader of her poems as also her wonderful posts in lyrical prose. She also introduced me to Facebook Page being operated by her in the name of her late son Gobind Shahzaad Singh- a victim to a terminal diseasein his early twenties - which also has an enormous following . This maiden published poetry collection by her is rightly dedicated to him .
Lily Swarn has been an all rounder , excellent in academics & a Gold Medalist, who dabbled in dramatics, acting in English plays and was also student Editor of the English section of the magazine . To cap it all, she has recently won The Reuel International Prize for Poetry,-2016 .
Her poetry conforms not only to the simple and popular definition of poetry given by Worsworth as being ‘ spontaneous overflow of powerful feelings , taking its origin from emotions recollected in tranquility ‘ but also to the more subtle purpose of poetry given by T.S.Eliot who calls poetry ‘ not a turning loose of emotion but an escape from emotion , not an expression of personality but an escape from personality ‘ . Eliot further emphasizes the presence of both emotions and personality for making an escape from these possible. I think this also explains the background of Lily Swarn proverbially ‘wielding the pen again’ , though literally she presses the alphabets on the key board of her I phone and with what ease ! 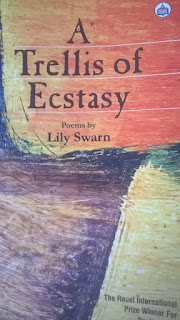 Apart from the statement of the fact that the collection is dedicated to her Late son, the Foreword by Dr. Ampat Koshy, the Preface and Acknowledgements by the poet , the tributes to the poet recorded by some well known names in Modern Indian Poetry in English, form an integral part of the collection .
A Trellis Of Ecstasy is a collection or rather a bouquet of about 140 and odd poems divided into sections like ‘ The Prize Winning Poems’, ‘ Conversations with my soul’, ‘Nature Poetry’, ‘Love’, ‘ Spontaneous Ponderings’ , ‘ Portraits’ and ‘Alliterations’ . This division is perhaps to facilitate the reader in marking his/her first preference to start reading , though I am sure that no one would leave the other sections unread or untouched, such is the magic hold.
The poet comes across as a keen observer of persons and phenomenon. She is also well read . In her Nature poems, all sights , sounds , pictures and smells come alive as she spews out the names of scores if not hundreds of flowers attributing to them rare characteristics which are spelt out poetically and have a mesmerizing effect. She talks of Spring as well as Autumn and tells how they affect us in various ways. Though an urbanite, hills and mountains not only fascinate her but also seem to beckon her.She mentions Yogis, and Derveshis in her poetry and that speaks of her mental make up and predilections . Religion in a general way forms a theme of some of her poems. Her religious bent of mind is reflected in the poem Guru Govind Singh, the Tenth Guru or the Dashmesh . Her late son was named after him . A quote from the holy Guru Granth Saheb is a daily feature that she posts regularly . She can also write convincingly and with authority on Kali or Durga. She is steeped in mythology too and a poem is about Aphrodite, the Greek mythological entity.
The images she builds are just amazing .
She is quite at ease with astronomical , architectural terms . Geographical phenomena. She talks about veins, arteries and other medico- physiological terms with authority and is quite convincing.
In ‘Love’ poems she does talk of emotions , the demands that love makes upon a person, the prerequisites for entitlements to love . Passion mostly runs as an undercurrent with nuanced expression unlike in her Nature poems where she is more explicit and forth coming .
Since poetry is a reflection of life and life experiences , it is not goody goody all the time. Her poetry at times becomes sad and morbid , and she speaks of death , gore, bloodshed , poverty , deprivation, exploitation also. A realist and a down to earth person ,she finds false sense of grandeur , ego, condescension rather repulsive.
In the very first poem ‘ Guava Tree’ we find a little school girl’s adventure of ‘stealing’ from a guava tree. ‘ Double Diva ‘ heralds the arrival of a younger substitute , stealing the thunder from a senior much to the latter’s discomfort and discomfiture.
‘ Meena’ is about a woman whose glamorous world comes shattering down with the new found fact that she is suffering from AIDS.
‘ Jalebi Amidst Poverty’ relates a poor girl’s adventure of stealing and savouring a piece of Jalebi , a delicacy promised her many a time but never given, and the vendor chasing to hit her.
‘Sunaina’ is about a girl, only fourteen and a domestic help , becoming a rape victim .
‘ Guru Gobind Singh ‘ about the Great Guru ,the saint Soldier riding his blue steed .
‘Sohni Mahiwal’ about the saga of love and separation .
‘ Why Fret ‘ gives a new sociological- psychological perspective to Draupadi of the Mahabharat.
There are poems for every mood and temperament . Some contain deep philosophy .
Apart from other literary merits, the outstanding features of this collection are her excellent vocabulary , her felicity with the language and her way with the written word.
A poetry lover’s delight !
Posted by aarkay at 9:20 AM