Today is the death anniversary of Utpal Dutt, a popular actor of Bengali and Hindi cinema.He started his acting career as a theatre artist Working in English and Bengali theatre , he is known to have acted in many Shakespeare and Brecht plays. Later he moved to acting in Bengali and Hindi films and in a career spanning over four decades,he worked in movies like Saptapadi, Bhuwan Shome, Shakespeare Wallah,Chowringhee, The Guru, Saat Hindustani, Bombay Talkie, Calcutta 71,Mere Jeevan Saathi,Gol Maal, Shaukeen, Ek Adhuri Kahani, Honeymoon,Julie, Amanush, Shaq,Do Anjaane, Swami,Naram Garam, Agnipath, Agni Pareeksha, Aar Paar, Aagantuk and many many others.
His large expressive eyes and dialogue delivery were his USP. 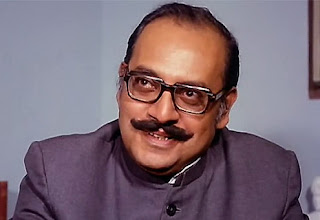 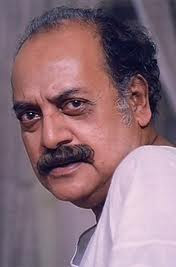 A winner of many film awards like the National Film Award for the Best Actor , Film-fare award for the Best Comedian which he won three times,he was also honoured with a Fellowship of the Sangeet Natak Academy for his lifetime achievement.
Our humble tributes to the versatile actor !
Posted by aarkay at 8:35 AM