Today is the death anniversary of , the maestro who raised the level of Shehnai from a popular folk instrument to Concerts as early as 1937 when he performed on stage in Calcutta.An internationally acclaimed artiste, he had the distinction of playing Shehnai on the eve of Indian Independence in 1947 and also on the eve of Republic Day in 1950 in Lal Qila, a tradition which was carried on for years. 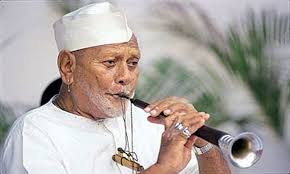 He was a recipient of Padma Shri, Padma Bhushan,Padma Vibhushan and Bharat Ratna.

Our humble tributes to the maestro and the legend !
Posted by aarkay at 6:29 AM